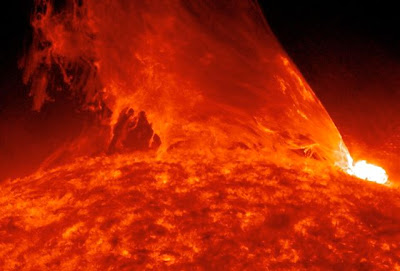 OUR SUN IS GETTING RESTLESS
Recent sun flares have been getting bigger lately.
Late last week, a massive one erupted
and lasted 90 minutes (most unusual.)
Fortunately for us, the solar flare was aimed
in an opposite direction from the Earth.
And so we didn't feel the consequences,
which can include disruption of radio transmissions,
failed satellite communications and electrical interference.
The NASA Solar Dynamics Observatory tracks
sun spots and solar flares as they have significant
impact on atmospheric and electrical conditions.
As we get closer to 2012, when the sun is due to
reverse its magnetic poles (every 11 years),
solar flares grow with intensity.
This photo captures last week's massive flare
which reached 300,000 miles beyond the sun's surface.
Swirling and twisting masses of erupting plasma
are seen blowing into space -- some returning to the surface,
and some escaping in tremendous explosions.
(Those of us in northern parts of the globe
are witnessing dramatic Northern Lights, aurora borealis.)
Photo: Courtesy of NASA Solar Dynamics Observatory
Posted by Rick Forrestal